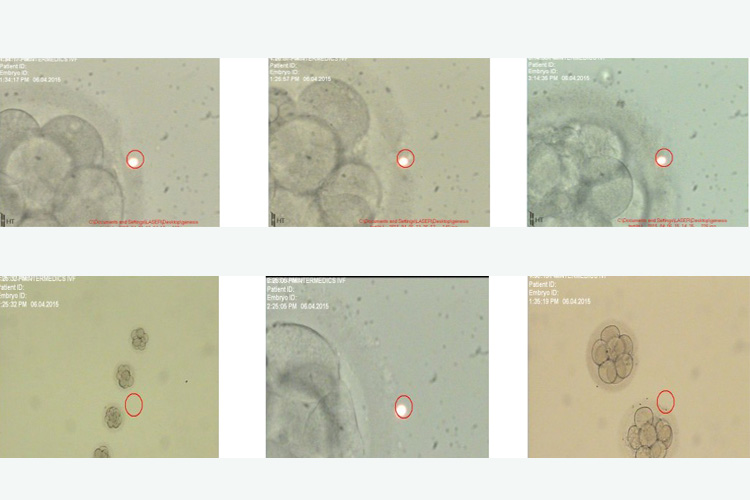 Assisted zona hatching (AZH) is a procedure of assisted reproductive technology in which a small hole is made in the zona pellucida, using a micromanipulation, thereby facilitating for zona hatching to occur. Before being transferred back to the womb a hole is made in the outer layer zona pellucida of the embryo or it is thinned, using acid, laser or mechanical methods.

For the first 5 to 7 days of development, the embryo is surrounded and protected by an outer shell called the zona pellucida. In normal circumstances, when the embryo reaches the uterus, this zona partially dissolves and the embryo ‘hatches’ out, allowing it to implant in the uterus. In some patients it is thought that infertility may be caused by a hardening of the zona, which makes it difficult for the embryo to hatch and implant. Assisted hatching is a laboratory micromanipulation technique carried out before the embryos are replaced in the uterus that helps the embryo to hatch from the zona.

Hatching is a process by which the fully developed embryo comes out of its shell (zona pellucida) and starts communicating with the uterus. Under certain circumstances, like thick shell, (in case of endometriosis or due to defective oogenesis), hardened shell (frozen-thawed embryos) etc. artificially starting the hatching process helps embryo to implant. In this process, part of the shell is chopped off carefully using laser machine.

1. The woman is aged 35 years or older
2. The woman has high FSH levels
3. Couples who have failed to get pregnant following previous IVF cycles
4. Couples where a distinct thickening of the zona is noted by the embryologist.
5. Frozen embryo replacements
We believe that the use of assisted hatching results in higher pregnancy rates in very selected cases. For example, it has been noted that in the older woman the zona pellucida around the embryo can appear to be thickened. The making of a ‘weak point’ in the zona may help implantation. But in routine cases there is no convincing evidence that it helps to improve chances of pregnancy.

“ACME Fertility really very good. The treatment given here is far far better and the results obtained are very fast. I am really very happy as i got positive pregnancy results within a very short span of time under the treatment of Dr. Neelam Bhise. Thank you!”