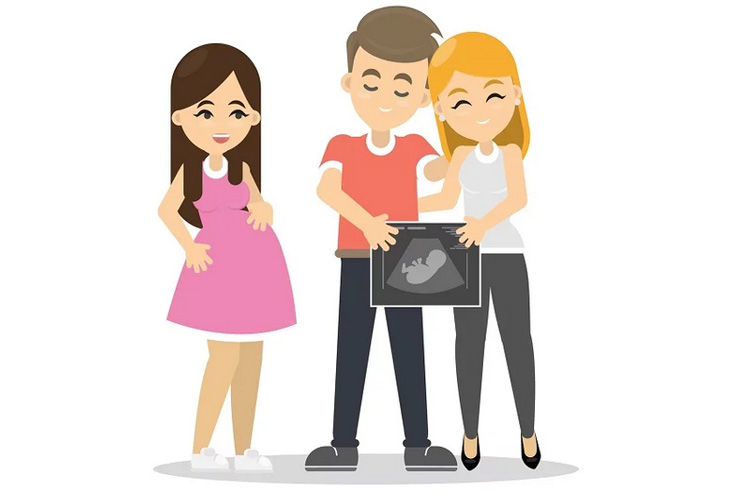 Surrogacy is indicated for women with diseased uterus, absent uterus (surgical removal, congenital absence), repeated implantation failure, and medical unfit to undergo stress of pregnancy and labor. At ACME fertility we provide the facility for Surrogacy packages which includes provision of surrogate, donors, legal adviser, surrogate house, and obstetric care of surrogate, so that to assure you stress free procedure, without legal complication at very reasonable charge.
Gestational surrogacy (GS)is called, when the intended mother is not able to carry a baby to term due to hysterectomy, diabetes, cancer, etc., her own eggs and the intended father’s sperm are used to create an embryo (via IVF) that is transferred into and carried by the surrogate mother. The resulting child is genetically related to its parents while the surrogate mother has no genetic relation.
Gestational surrogacy is now been routinely conducted at our center. After the review of the requirements of the intending parents further steps are taken.

Legal Rationale: -
The intended parents/Commissioning Couple may enter into a surrogacy arrangement because of:
1. Infertility: Female infertility, or other medical issues, which may make the pregnancy or delivery risky.
2.Risky pregnancy: The intended mother could also be fertile and healthy, and prefer the convenience of someone else undergoing pregnancy and labor for her.
3. Same sex couple: Surrogacy can help the same sex couples realize there dream of having their own child which is otherwise not possible for them to have a child of their own by natural way.
4. Single parent: For those who want to fulfill their desire of having a child sans a partner, surrogacy is a ray of hope.


It has been universally observed that whenever IUI is combined with induction of ovulation or controlled ovarian stimulation, the success rate in the form of pregnancy is improved. Depositing actively motile sperm free from debris, leucocytes, pus cells, and dead sperm has a significant reproductive advantage in fertilizing the released oocyte from the ovary, in the fallopian tube. During natural intercourse, semen is deposited in the vagina, motile sperm from the semen move towards fallopian tube. Out of around 100 million sperm from a ‘normal’ man deposited in the vagina, only about 1 million sperm find their way to the upper portion of the uterine cavity and only few hundred enter the tube where fertilization occurs. In IUI, 5-10 million motile sperm are deposited at the top of the uterine cavity near the opening of the tubes thus significantly increasing the chances of healthy sperm reaching the mature oocyte.

B. Preparations
A woman needing artificial insemination to achieve pregnancy can obtain a sperm sample from her male partner or sperm from sperm donation may be used if, for example, the woman’s partner produces too few motile sperm, or if he carries a genetic disorder, or if the woman has no male partner. Sperm is usually obtained through masturbation or the use of an electrical stimulator, although a special condom, known as a collection condom, may be used to collect the semen during intercourse.
A woman’s menstrual cycle is closely observed, by tracking basal body temperature and changes in vaginal mucus, or using ovulation kits, ultrasounds or blood tests. When using intrauterine insemination (IUI), the sperm must have been “washed” in a laboratory and concentrated and warmed to 37C. The process of “washing” the sperm increases the chances of fertilization and removes any mucus and non-motile sperm in the semen. Pre and post concentration of motile sperm is counted.
For donor sperm, sperm from a sperm bank will be frozen and quarantined for a particular period of six months and the donor will be retested before and after production of the sample to ensure that he does not carry a transmissible disease. Sperm samples donated in this way are commonly produced through masturbation by the sperm donor at the sperm bank. A chemical known as a cryoprotectant is added to the sperm to aid the freezing and thawing process.
If sperm is provided by a private donor, either directly or through a sperm agency, it is usually supplied fresh, not frozen, and it will not be quarantined. Donor sperm provided in this way may be given directly to the recipient woman or her partner, or it may be transported in specially insulated containers.

C. Procedure
When an ovum is released, semen provided by the woman’s male partner, or by a sperm donor, is introduced into the woman’s vagina or uterus. The semen may be fresh or it may be frozen semen which has been thawed.
A method of artificial insemination is to insert semen directly into the woman’s uterus. Where this method is employed it is important that only ‘washed’ semen be used and this is inserted into the uterus by means of a catheter. ‘Washed’ semen is used to eliminate the risk of cramping. Semen is occasionally inserted twice within a ‘treatment cycle’.
A pregnancy resulting from artificial insemination will be no different from a pregnancy achieved by sexual intercourse. However, there may be a slight increased likelihood of multiple births if drugs are used by the woman for a ‘stimulated’ cycle. To have optimal chances with IUI, the female should be under 30 years of age, and the man should have a TMS of more than 5 million per ml. In practice, donor sperm will satisfy these criteria. A promising cycle is one that offers two follicles measuring more than 16 mm, and estrogen of more than 500 pg/mL on the day of HCG administration. A short period of ejaculatory abstinence before intrauterine insemination is associated with higher pregnancy rates.

Other Techniques -
a) Intracervical insemination
Intracervical insemination (ICI) is the easiest way to inseminate. This involves the deposit of raw fresh or frozen semen (which has been thawed) and which has been provided by the woman’s partner into the cervix usually by injecting it with a needleless syringe. Where fresh semen is used this must be allowed to liquefy before inserting it.
The syringe should be inserted carefully so that the tip is as close to the entrance to the cervix as possible. The woman should be comfortable at all times. A vaginal speculum may be used to hold open the vagina so that the cervix may be observed and the syringe inserted more accurately through the open speculum. The plunger is then pushed forward and the semen in the syringe is emptied into the vagina. The syringe (and speculum if used) may be left in place for several minutes and the woman is advised to lie still for half-an-hour or so to assist fertilization.
Timing is critical as the window and opportunity for fertilization, is little more than 12 hours from the release of the ovum. For each woman who goes through this process be it AI (artificial insemination) or NI (natural insemination); to increase chances for success, an understanding of her rhythm or natural cycle is very important. Advanced technical (medical) procedures may be used to increase the chances of conception.
 b) Intrauterine tuboperitoneal insemination
Intrauterine tuboperitoneal insemination (IUTPI) is insemination where both the uterus and fallopian tubes are filled with insemination fluid. The cervix is clamped to prevent leakage to the vagina, best achieved with the specially designed Double Nut Bivalve (DNB) speculum. IUTPI can be useful in unexplained infertility, mild or moderate male infertility, and mild or moderate endometriosis. In non-tubal sub fertility, fallopian tube sperm perfusion may be the preferred technique over intrauterine insemination.
 c) Intratubal insemination
IUI can furthermore be combined with intratubal insemination (ITI), into the Fallopian tube although this procedure is no longer generally regarded as having any beneficial effect compared with IUI.

E) Pregnancy rate
Success rates or pregnancy rates for artificial insemination may be very misleading, since many factors including the age and health of the recipient have to be included to give a meaningful answer, e.g. definition of success and calculation of the total population. For couples with unexplained infertility, unstimulated IUI is no more effective than natural means of conception.
The pregnancy rate also depends on the total sperm count, or, more specifically, the total motile sperm count (TMSC), used in a cycle. It increases with increasing TMSC, but only up to a certain count, when other factors become limiting to success. The summed pregnancy rate of two cycles using a TMSC of 5 million in each cycle is substantially higher than one single cycle using a TMSC of 10 million. However, although more cost-efficient, using a lower TMSC also increases the average time taken before getting pregnant.

“ACME Fertility really very good. The treatment given here is far far better and the results obtained are very fast. I am really very happy as i got positive pregnancy results within a very short span of time under the treatment of Dr. Neelam Bhise. Thank you!”